# Had to reset expiration date of JPGRepair.exe.

# JPEG-Repair, MCU editor resizable, re-worked file save mechanism to get rid of clutter of files produced during repair.

# Updated URL to check latest version, it was pointing to dead URL.

# Removed preview from source file selection; rationale is that corrupt files fail to render most of time and can even hang the dialog (which is why rendering was disabled by default).

# JPEG-Repair, added omit option in file selection dialog, can be used to skip number of bytes in source file. For example, number of encrypted bytes in STOP/DJVU ransomware affected files is known (153605 bytes), we can tell JPEG-Repair to omit this portion of the file. Since STOP/DJVU is wide spread and common, double clicking text box will autofill this value.

# Fixes bug that caused error while scanning end of drive

# Some tweaks in corrupt file detection.

JpegDigger tries to detect duplicate files (default behavior), these will not be added to file list or saved when autosave is active.

To repair a JPEG you typically need to remove corrupt data which affects alignment of all data following corruption. To re-align you then insert stuff bytes (zeros) which leave a grey horizontal line. In this video I show how I use MCUs directly above the grey line to replace the stuff bytes.

# Manual reconstruction of a corrupt non contiguous file requires less clicks: add option to auto render, so resulting image is loaded as soon as you select or deselect clusters.

# May feel slower as I was too optimistic in previous build with discarding blocks of data, resulting in the tool missing potentially recoverable data.

# I removed and changed code that might upset virus scanners because that’s becoming a bit of a plague.

Various virus scanners have been flagging my tools as trojan lately, I must stress these are false positives. JPEG-Repair and JpegDigger do what they’re intended for, repair and recover digital images. They do not leave traces on your system, don’t call home or anything of the sorts.

These detections are ‘heuristic’ Some AV vendors refer to it as ‘AI’ that supposedly learns how malware behaves and what it looks like. So the scanner does not actually and factually find a virus, but ‘thinks’ the program might contain some harmful code. Sometimes this is based on for example readable strings in the compiled program. So for example there is code in the program that deals with handling the registration key. Certain variable names may resemble code in ransomware software as both deal with hashing and encryption. And indeed, something simple changing names of such variables to something more neutral, lowers detection rates.

It is kind of ridiculous that I have to put so much time and work into this because they get it wrong.

If your AV software complains about JPEG-Repair or JpegDigger, please submit them to the AV software vendor for analysis.

# Brings JpegDigger to version 2.6.48. I have been bug hunting to try to pin point and solve some perky bugs that show up lately; hang while scanning, hang while copying and error 13 messages. Thing is I can’t reproduce them, which makes them hard to trouble shoot.

# I removed bunch of code related to detection of encoding, encryption etc. of data. There are no functional changes.

Purpose of the drill is to get rid of any code that may trigger false positives from AV security products which are a plague lately. JPEG-Repair and JpegDigger are both clean. I try to be as open as possible, the software does not install, modify registry, phone home or any of that. But lately AV vendors frequently started flagging both tools as possible malware, or trojan or whatever. These are false detections!

Requested by users. As the image magnifier shows goes through various conversions the cross hair may be off under conditions, so I also added the option to calibrate: double click magnifier to launch calibration window.

RAW files are typically 20 MB or larger. JPEG-Repair ignores FF D9 marker then ‘append’ header feature is used which implies it will treat the full size of the RAW as JPEG data. Program will feel slow because all this data is processed. New truncate feature will cut file at point up to where pseudo decoder came which is normally the end of JPEG data.

# Fixes loop where cancel button didn’t do anything

JPEG-Repair can encounter a situation where it keeps reloading the damaged file in patch mode, it was not possible to cancel out of that.

# Due to an influx in STOP Djvu related cases this version adds an extra option to the append feature:

# Mostly usability, as I am probably the one who uses JPEG-Repair the most I removed some stuff that I actually never used.

# Magnifier, I want it to be able to watch it next to mouse pointer: Left click to make it so. Release and it will snap back in it’s original position.

# I also do a lot of saving and file loading for example because JPEG-Repair removes invalid markers and such so I made it batch this. When opening a corrupt file it may now automatically save and open files a few times.

# Enable align option removed. Current mechanism is, if value for bytes to add > 0 then it’s enabled.

# Bytes removed value no longer copied to bytes to align value. If you wish to copy the value however, simply double click bytes to add value.

# As modifying resolution is in fact patching I moved it to the editor area.

# Some modifications to append option based on experiences repairing ransomware encrypted JPEG’s.

Decoding may fail however with severely corrupted JPEGs in which case editor is disabled.

Decoder may fail only after some time corrupt data was introduced in stream. JPEG-Repair automatically selecting fail byte address results in user removing corrupt data from the point while corrupt data that preceeds that point remains. So user now has to click image to select point from which corrupt data is to be removed. I feel it’s more consistent and more correct. My strategy is always to click slightly before visual corruption to make sure all corrupt data is actually removed.

Did some optimizations in pseudo decoder. I was still decoding data I never actually used.

Lower part of portrait oriented images could not be selected by clicking the image. Took me a while to figure out, but is fixed now.

# Default for ‘show preview’ in browser for corrupt files is now Disabled.

I got too man reports where JPEG-Repair would hang when selecting corrupt files. Reason for this was the image viewing component I use would hang trying to decode the corrupt file.

Changes to JPEG- Repair from version 2 >

I feel quite confident in saying, that IF a file is repairable (so, contains JPEG data + we have reference header), JPEG-Repair Toolkit can help you do it. So if you need to fix corrupted photos, you may want to give it a try.

2.5.91: Most work went into GUI, program flow. Goal was to make JPEG-Repair more user friendly. Several components moved to places to where they’re needed rather than just sitting in the main screen. Magnifier now has a fixed position (no longer needed to click the mouse). 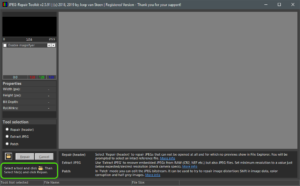 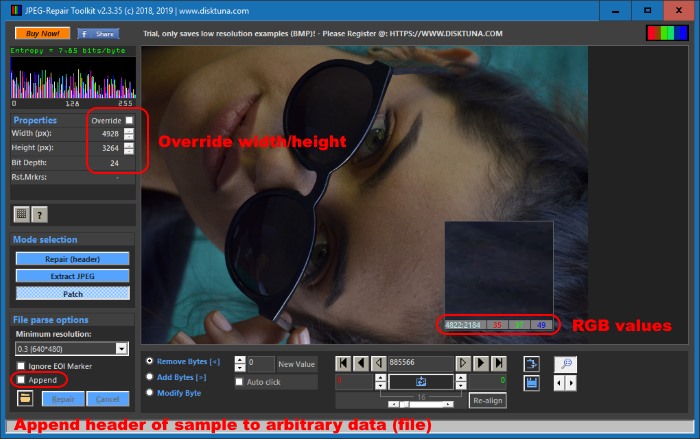 Append option is particularly powerful! Check video for an example, none of the competing tools (Stellar, HetMan, PixRecovery, Picture Doctor, JPEG Recovery Pro) is able to repair images like these. Apart from example in video several others (more interesting pictures) were fixed using this method.

These are the different stages:

Thanks to append option we can virtually repair any JPEG, as long as it contains JPEG data and we have a suitable donor/reference file.