When you discover photos on your SD card are corrupt or the memory card itself is corrupt you should:

There are free and paid ways to try to recover or repair your photos. So I’ll be showing an example of how you can do a JPEG repair using free tools such as the HxD hex editor, JpegSnoop and Paint.NET.

The image format (of the photos) does not matter at this point, whether you are shooting in JPEG, CR2, NEF or any other format. Your first priority should be getting a sector by sector disk image of the entire card.

If you already ran chkdsk and the files on the card were converted to filennnn.chk files

I still strongly advice to create a disk image file of the card! Then copy all files with the filennnn.chk format to a hard disk. Use one of the tools mentioned here to convert the CHK files: https://www.raymond.cc/blog/how-to-recover-chk-files-created-by-chkdsk-and-scandisk/.

Photos on SD card are corrupt, what’s causing it: 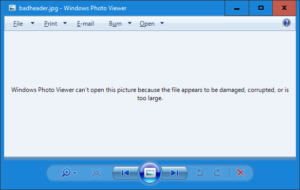 Corrupt JPEG Header will get you this ..

In this example I will try to recover the JPEGs from a corrupt flash drive that was sent to me by a customer. It is actually the case that prompted me to write the first quick and dirty version of JpegDigger. Of course the case was brought to me as a corrupted JPEG file issue. After further diagnosis it turned out that not the individual files were corrupt, but the underlying file system. 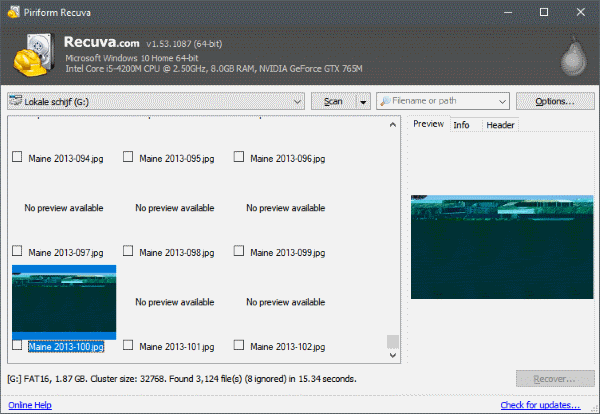 Recuva, a free undelete tool can not recover the corrupt JPEGs 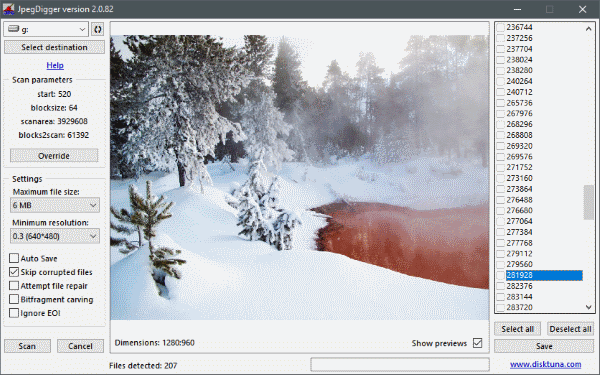 JpegDigger did recover the JPEGs from the corrupt file system

Difference in number of files found in above screenshots is explained by the fact that JpegDigger only detects JPEG where a file system based file recovery tool typically detects all file types that it can find references for in the file system. Drawback of a carver is that original file names are not restored.

If you need support for more file types and advanced image reconstruction try something like JPEG Recovery LAB (JPEG, CR2, NEF are supported as well as AVI, MP4, MOV and MPEG-2 video formats). It can recover intact photos and videos where other software fails!

Option 2: Safe way to run chkdsk if photos on SD card are corrupt

Although I urged you not to run chkdsk before, there is a possibility to use chkdsk safely on a memory card! I will explain how, but before that:

As chkdsk will change the contents of your disk image, I suggest you work on a copy of this disk image file! After all, the disk image is your safety net.

Photo itself is corrupt

Files commonly start with a header, after which the actual file data follows. The header helps software interpreting the data within the file. If the header is intact, the software (image editors and viewers) can use it to decode the actual image data. Most likely you can not open the digital photo at all if the header is corrupt. If the image data itself is corrupt the image will open but look distorted.

For the rest of this article I will address JPEG only. If you shot your photos in a different format (like RAW) you may be able to use JPEG-Repair Toolkit to extract JPEGs from those. Below repairs done with a hex editor can be done automatically by JPEG-Repair Toolkit.

Open the file in a hex editor (like the excellent freeware HxD). Verify there is actually data in the file. If the file only consists of zeros or a byte pattern (like FF FF FF FF etc.) then the file is beyond repair.

Using HxD: Use Search > Find, search for FF DA using HEX data type. If not found the file is beyond repair. 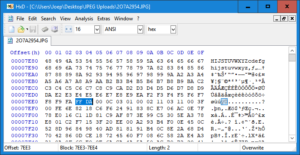 It is possible multiple instances of FF DA are found, you need the LAST one. There may be a few if the JPEG included a thumbnail and preview.

Note: If you find many FF DA byte combinations then you’re probably not looking at JPEG data but random binary data. The file then is probably beyond repair.

Write down the address (Using View >  Offset base you can switch to decimal numbers if you like). Now search for FF D9. Or, go to end of the file which is where you’d normally find FF D9.

Once found, select the entire block including from the last FF DA upto and including FF D9 > right click > copy.

Open a new file > Paste Insert > Save as ‘image.jpg’. You have now copied the image data to a new file.

Open a known good file that was shot with the same camera, using same resolution and orientation (portrait/landscape). 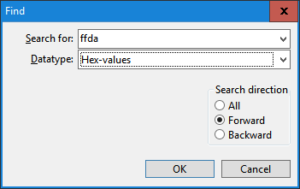 It is possible multiple instances of FF DA are found, you need the LAST one.

Switch to your image.jpg file TAB containing the image data, make sure you’re at offset 0 (zero) > Paste Insert > Save the file

If damage was limited to the header you should now be able to open your file. Open and Save it using something like Paint.NET (free) to update the file thumbnail (if any). 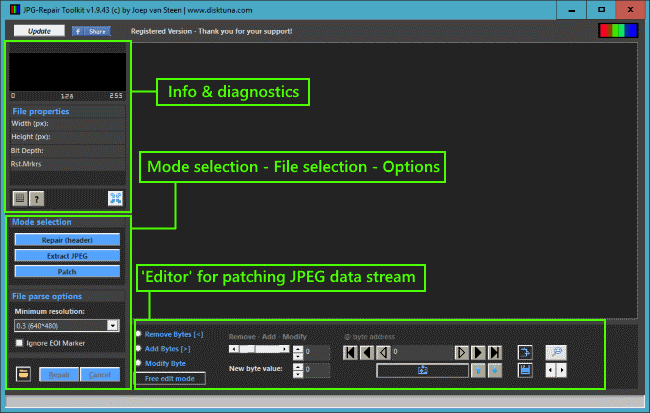 JPG-Repair Toolkit will patch the header from an intact JPEG on a corrupted JPEG photo and more ..

Apart from trying to fix the header this software also attempts to find embedded JPEGs. Often, this is all they can do if a header is too corrupt. A free alternative for extracting those JPEGs is JpegDigger.

Here’s where it gets really complicated!

One of the things I initially used is JpegSnoop to find out where the JPEG decoder choked while decoding the image. JpegSnoop will give you the exact byte address. It is the easy way of finding invalid JPEG Markers. 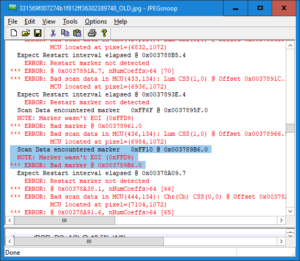 Once a JPEG decoder starts decoding the image bitstream it does so until it hits FF D9. FF has special meaning to decoders. It means a marker follows. In between FF DA and FF D9 there is only a limited number of JPEG markers ‘allowed’:

FF 00 (zero, zero) and FF Dn where n is a value from 0 to 7. Stripping anything that does not follow this rule or replacing FF XX where XX are arbitrary values by FF 00 should get you an image that decodes all the way.

Then you may be able to repair remaining damage or corruption using something like the freeware Repair-Jpeg. It allows you to realign the image and remove color bands etc..

If your image contained so called Restart Markers repair may be simply a matter of editing it with a tool like Paint.NET. Restart Markers prevent corruption propagating further into the image. 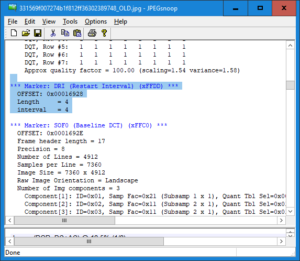 This JPEG contains Restart Markers. All I did was strip invalid JPEG markers from the image bit stream. The free software used to repair this JPEG Photo is:

Note: I have now started working a utility to automate the above process + it will also automatically fix a JPEG containing restart markers like the example below.

This image can be found here (Kudos to Gracie for letting me use the photo!): 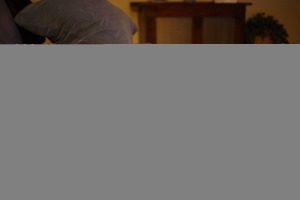 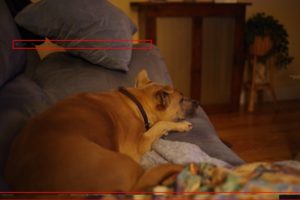 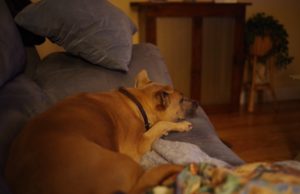 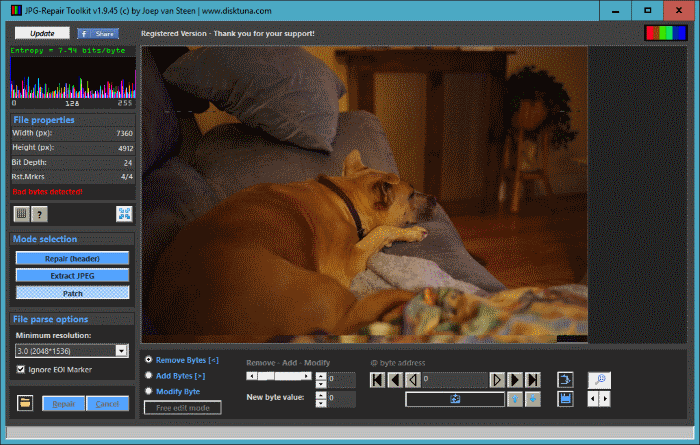 Rather than removing all invalid JPEG markers using JpegSnoop and the HxD hex editor, JPG-Repair Toolkit can do this automatically. It ‘knows’ restart markers so it will leave those alone.

It is often possible to repair corrupt digital photos yourself if photos on SD card are corrupt. It is often even possible with free tools as demonstrated in this post. First step is to figure out if it is the individual photo that is corrupt or the underlying file system. If the latter then you need to recover the photos rather than repair them.

Repair of individual photos can be done manually using a hex editor or you can use photo repair software.

10 thoughts on “Photos on SD card are corrupt”