A USB flash drive constantly freezing and disconnecting is most likely a sign of degraded NAND. NAND has a finite number of erase/write cycles, the cheaper the NAND used, the smaller this number is. Also certain conditions can lower the number, such as the drive being exposed to heat.  Despite numerous sites recommending you run chkdsk, this is NOT the solution to recover your data.

Do basic trouble shooting, try another USB port, if that does not work, try on a different computer. No amount of ‘chkdsk-ing’ or reinstalling drivers and whatnot will help fix degraded NAND flash chips.

This post assumes you need the data on the drive recovered.  In all other cases just replace the drive, it is highly unlikely you will even be able to use it as a reliable drive.

There are two basic scenarios:

Depending on what situation you’re facing you may be able to recover the data yourself or your best shot is to send it to a data recovery service.

If Windows assigns the USB thumb drive a drive letter but at some point the drive freezes then this is similar to behavior we see with drives with bad sectors. As far as Windows is concerned these are identical. If the situation is bad Windows may even disconnect the USB drive while you are trying to copy files or even scanning it using file recovery software.

Part of the problem is the USB interface itself, as it is a bridge between the device and the host. Commands from host need to be passed to the ‘drive’ and return codes need to be passed on back to host. Ideally the USB portion just passes on everything but often this is not the case. Also if a drive fails to read a sector it needs to handle this event, as does the USB portion, as does the host. If USB portion decides to wait Windows (the host) may just decide to ‘drop’ the device.

In general file recovery software is designed to deal with logical, file system issues not with ill behaving hardware, specially if the drive is disconnected in the middle of a scan. If your file recovery offers such a feature try cloning/imaging the USB flash drive instead. By this, I mean create a sector-by-sector copy of the drive to another drive or to file. But even then it may simply hang if the drive is disconnected. I have also seen examples of the software continuing as if nothing happened even though the drive had completely disappeared. Of course the software didn’t copy anything.

If you only need a couple of files you may be able to copy them using something like unstoppable disk copier.

Some times the condition of the NAND is so bad that it literally disconnects over and over after only reading a couple of MB. My tool JpegDigger can control the YKUSH XS board to deal with such situations:

JpegDigger detects the dropped connection > signals the YKUSH board to power cycle attached USB drive > JpegDigger waits until drive is recognized again and then continues imaging the drive. Power cycles are probably the best way to deal with errors we encounter when accessing flash based devices whether these are SSD drives, memory cards or USB flash drives. The professional hardware DeepSpar USB Stabilizer sets default behavior to respond to errors encountered while accessing flash based drives to ‘power cycle device’.

Computer freezes as soon as USB thumb drive is connected

Unfortunately this situation is less suited for DIY. The problem is that as soon as the OS detects the drive it will attempt to read from it. If reads fail it will try over and over again, this may cause Windows to completely lock up. I have described this process in another blog post.

Using professional data recovery hardware it may still be possible to image such a degraded USB thumb drive. Specialist hardware is placed in between the defective drive and host PC, allowing it to hide the fact the device is so misbehaving while at the same time trying to re-establish access. As far as the OS or the drive imaging/cloning software are concerned, they’re dealing with an okay drive. After the drive has been cloned using this device, data can then be recovered from the drive image file using file recovery software. This type of hardware is too expensive though to purchase to resolve a single case.

In some instances, although imaging the drive seems successful, the pen drive only returns zeros! Only remaining option then is chip-off recovery: The actual NAND memory is de-soldered from the drive and read using a NAND reader. Since once removed the controller is taken out of the mix, the raw NAND dump needs to be transformed to a logical image. This method should be regarded a last resort as it is labor intensive and expensive. 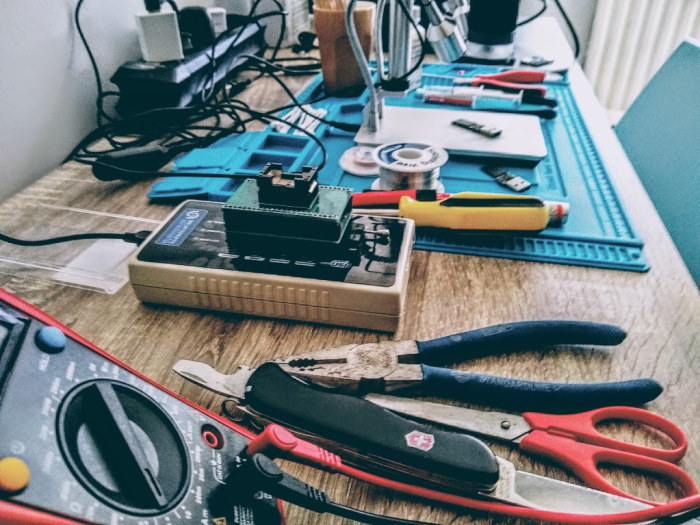