There’s a couple of data recovery and photo related forums I visit on a regular basis. And being part of those communities, being entertained, learning a thing or two, I sometimes give back by repairing a few corrupted photos. Note: I do not own the copyright to these images!

All these photos were repaired using JPEG-Repair only or JPEG-Repair to edit RAW bitstream data and a photo editor (Paint.net) for post processing. This basically means anyone can repair images corrupted in similar ways! Doing this yourself can save you a lot of money compared to have my JPEG repair Service repair them for you because what you pay for in a large part is my time. Many of below examples are category 3 repairs:

As an example, this photo I recently repaired for a customer at the cost of $17,85: 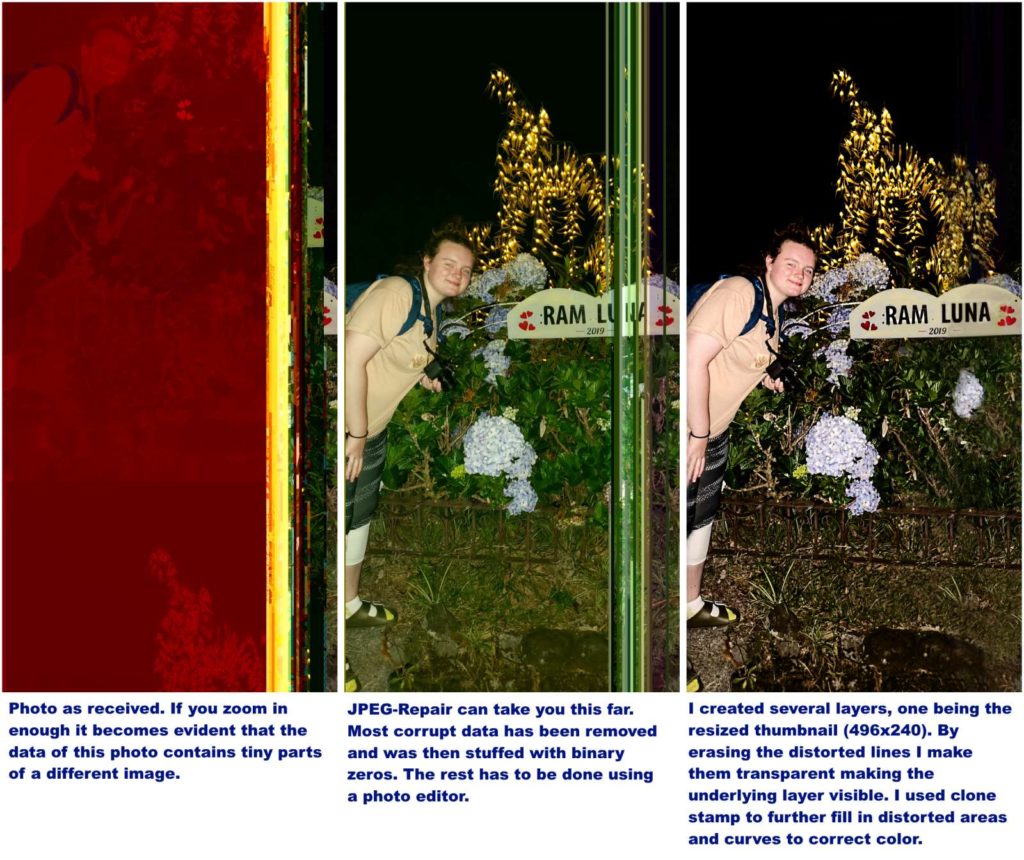 For these I used nothing but JPEG-repair, no additional post processing with a photo editor was required.

Source: DP Review forums (photography forums).  These photos had the tiniest amount of bit corruption in the JPEG bitstream which I removed and stuffed with zero bytes to re-align image data.

For these I used JPEG-Repair to remove byte corruption and Paint.net for clone stamping parts I had to cut. You can see colors distort and image data shifts in two blocks. Using JPEG-Repair I removed those 2 corrupted areas and stuffed zero bytes to make up for lost bytes. I used Paint.net for filling in missing parts using the clone-stamp tool and to correct colors.

What I mean to demonstrate with these examples is that this type of corruption in photos can be repaired despite a common answer appears to be the contrary. It is true that these are close to impossible to repair using PhotoShop like editors because it’s the underlying data that is corrupt. It means standard photo restoration techniques fall short as they work with the data that is available. JPEG-Repair is a tool designed to remove the corrupt data.