I smoked for years, then got into vaping and then unfortunately started smoking again.

When you want to get into vaping, the options are overwhelming. Honestly I do not know even half of it, and each day I see and read new stuff. Tanks, mods, coils. AIOs (all in ones), pods, kits, e-cigarettes, pens and what not. Mouth to lung, direct lung, VG, PG, ‘sub-ohming’, tooo much information! Vaping, much more than smoking is like taking on a new hobby.

The first device I got looked like a pen. Like one you write with. It was terrible. It leaked e-liquid, taste was bad (burned) and it had to be re-charged all the time. The whole experience was frustrating and stressful. I decided to give it another try and ended up buying an Aspire Premium Kit. That was more like it! Good taste and satisfying clouds of vapor. 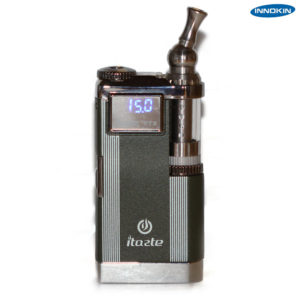 I ran into a second hand Innokin VTR and bought that too. I tried all kind of e-liquids and it was fun! This is what makes vaping more fun than smoking. Trying different liquids, tastes. With smoking you always have the same taste. You smoke automatically, I hardly ever really enjoyed it. Vaping is real fun. You can enjoy the taste like a good glass of wine. And you undeniably feel better and healthier. Your taste gets better and you smell better.

There are three things that trapped me into smoking again.

So yeah. I ‘picked up’ smoking again. For more than a year. A year in which I trashed my Innokin because it was broken.

So when I wanted to go back to vaping it appeared as if the market had exploded. I didn’t know where to start. I had forgotten about VG and PG. Had no idea what device to get. The Innokin was no longer sold and although I enjoyed it, it wasn’t ideal. So I Googled ‘starter kits’. I can’t remember exactly why anymore, but I settled for a Justfog FOG 1.

I had fun trying different e-liquids. But the ones I liked were sweet and ‘thick’. And the FOG 1 coils didn’t handle that very well. A few days and a brand new coil started to taste burned. Rather frustrating and expensive.

I chatted with the online store where I purchased the FOG 1 and most of my liquids and they recommended using a different device. Another starter set. The Vaporesso Veco ONE. And they were right. Coils last for weeks. Taste is better than the Justfog. The Veco ONE has a bigger brother, the Veco ONE Plus which I purchased as well. 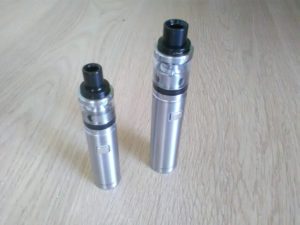 The Veco ONE and ONE plus from Vaporesso

The Vecos are considered starter kits. But I see myself using these as long as the internal batteries last. They use the same coils which I find very convenient. They cope very well with high VG (Vegetal Glycerin), which is the fluid in which Nicotine (if desired) and tastes are resolved. I also like sweet liquids which tend to clog up coils as well, but not with the Veco ONE. Coils easily last me at least 2 weeks and they are cheap compared to other coils.

In case of a starter kit, you get all of that. They’re also called AIOs which means ‘all in ones’. Differences between the ONE and the ONE Plus is battery capacity (1500 mAh vs. 3300 mAh) and tank capacity (2 ml vs 4 ml).

The MOD or battery is simple and only contains a fire button. You can not adjust anything. It is ‘unregulated’ which means you will get less power as the battery gets emptier. It does not bother me as I don’t notice it. The battery is internal so you can not change it. It is charged using a USB cable which I mostly have connected to my laptop.

The tank is connected to the MOD or battery using a 510 thread which means it can be used with most other mods too. If you even want to upgrade the mod because you want more options, you can continue using the Veco ONE tanks.

Mainly you have VG (vegetable glycerin) or PG (propylene glycol)or a mix of both, based e-liquids. The liquid is vaporized and this is what you inhale and transports flavor and nicotine. PG is thinner and delivers more of what’s called a throat hit. That throat hit feeling is what ex smokers may be after. I am more into the high VG liquids, which in general are sweeter and produce bigger clouds and better taste. 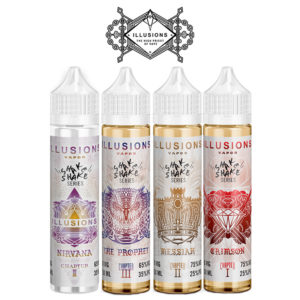 Liquids are almost always a VG/PG mix. In general, you get what you pay for. Cheap liquids, IMO also taste cheap.

Vaping. Do or don’t?

If you are a smoker I’d order a starter kit right away. It is nice, it is fun and you will feel better in a matter of days. If you’re not a smoker, then don’t.