DiskTuna is a tiny and free disk defragmentation and optimization software. It will only run when you want it to. It does not install background services or other crap-ware that slows the system down.

To make maintaining your hard disk using DiskTuna as accessible as possible, it can be used from a drive’s context menu or you can use a shortcut. DiskTuna offers an easy way to create shortcuts which will allow you run jobs using just one click. More about DiskTuna …

Tip: Download DiskTuna DFR now, and keep it on a USB key. Because you never know when you will need it.

With this freeware you can try repairing corrupt video (MP4, MOV) using a reference file.

The free version of JPGRepair is fully functional with the exception that it does not offer a batch mode (process multiple files at once). You can use JPGRepair to repair corrupt JPEG headers using a reference or sample file. More info here.

A quick summary of what I am working on… I will create some project pages so I can report progress. 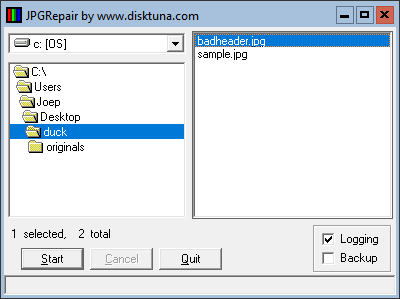 People seem to misunderstand sometimes what the iRecover Image Recovery mode does.
It scans for lost files. However it does not repair corrupt files. I get a lot of questions about this. Also, it is not uncommon for digital image and photo recovery tools to produce corrupt images.

Because I find that most reviews you’ll find on the web are a waste of time. They are either fake (submitted by the author of the software), anecdotical based on a single use by users, or inaccurate. With the latter I refer to reviews done by ‘professional’ reviewers on sites like TopTenReviews. I ran a series of data recovery programs against an old disk I dug up by accident. As it appeared empty I became curious what was on it. I was surprised by the number of products that weren’t able to recover meaningful data.

I am working on a Spinrite like disk utility that will scan a disk and monitor SMART data on the go. I may expand it into a DiskPatch like tool that is also capable of repairing boot sectors and partition tables. However it will be a Windows program, unlike DiskPatch (which runs in DOS, see DIY DataRecovery.nl for info on DiskPatch).

Somewhat unrelated to my core business because it’s no disk utility, I know … But like any other person with a smart phone, I take pics with it. And some times it is inevitable that there’s stuff in my picture that I don’t want there to be.

An Inpaint tool removes unwanted objects from pictures (Wikepedia). At the same time it tries to ‘guess’ what is behind the object that is being removed. Of course success depends highly on the surroundings, the background of the unwanted object.

The Inpaint tool will also be part of my JPEG Repair Toolkit.