“When you want to defragment your hard drive, you can either use the built-in Windows utility or download a more complex application, but few of them strike the right balance between functionality and ease of use.” – Softpedia

“Disk defragmentation is the process of consolidating fragmented data on a volume (such as a hard disk or a storage device) so it will work more efficiently. Fragmentation happens to a volume over time as you save, change, or delete files. The changes that you save to a file are often stored in a different place on the volume than the original file. This doesn’t change where the file appears in Windows—only where the bits of information that make up the file are stored on the actual volume. Over time, both the file and the volume itself become fragmented, and your computer slows down as it has to look in different places to open a single file.” – Source: Microsoft. 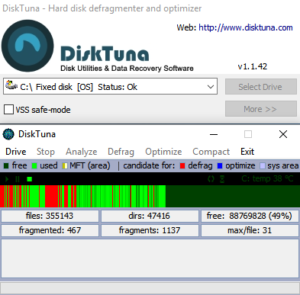 DiskTuna (formerly DiskTune from DIY DataRecovery.nl) is a tiny and free disk defragmentation and optimization software, that will only run when you want it to. DiskTuna does not install background services or other crapware that slows the system down.

It only runs on-demand.  However, to make maintaining your hard disk using DiskTuna as accessible as possible, it can be used from a drive’s context menu. Also, you can create one-click shortcuts to jobs.

Click a job shortcut to for example have DiskTuna defrag a disk quietly in the background. 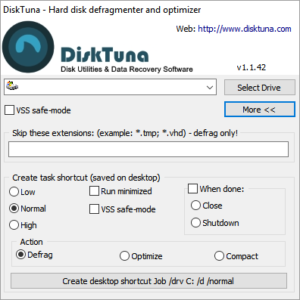 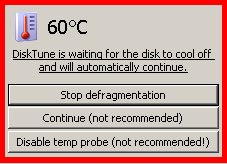 DiskTuna is capable of moving and defragmenting the MFT online.

Although the usefulness of disk defragmentation is open to debate, the author of the software, Joep van Steen, is an old fashioned guy that does believe that maintaining a hard drive is required to make a computer run as smoothly as possible. At the same time he was unhappy with defragmentation software available. It is intrusive, installing background services and slowing the system down. Or just too limited by only offering a defrag mode.

In his spare time he created DiskTune which was well received. Due to time constraints DiskTune wasn’t maintained for years. DiskTune is now back as DiskTuna and takes off where DiskTune left.

DiskTuna was discussed on the American version of “The Office”: “Beer me that disc, Tuna”, but unfortunately they got the spelling wrong.