The other week I received a SD memory card on which chkdsk was automatically run. Chkdsk turned all JPEGs into .CHK files. When Chkdsk removes certain files from the file system, it saves the content of the clusters that belong to the file in .CHK files. They are typically written to a folder called ‘FOUND.000’.

As soon as you discover it happened, you should stop using the memory card!

Recovering your photos if Chkdsk turned all JPEGs into .CHK files

If you stop using the memory card as soon as you discover the damage, it is often possible to recover your photos. There are two ways we can approach this. As mentioned, Chkdsk ‘saves’ data it deletes to filennnn.chk files (nnnn is a number Chkdsk assigns automatically). So one option is to examine those .CHK files.

Even if Chkdsk deletes files, chances are that the original files are still somewhere on the memory card. So that gives us a second option, we can try to recover those lost files.

When confronted with this situation I adopted my freeware tool JpegDigger so it accepts .CHK files as possible source as well. JpegDigger was originally designed to carve embedded JPEGs from RAW photo files. It can now do the same for .CHK files.

JpegDigger will scan the files for embedded JPEGs. If it detects a JPEG it will copy that into a new file with the proper file extension (.jpg). JpegDigger will do so in a sub folder created in the folder where the .CHK files are. Before using JpegDigger files therefor need to be copied to your hard disk: Do NOT do this on the SD card itself as it will ruin the chances for recovery using method 2. 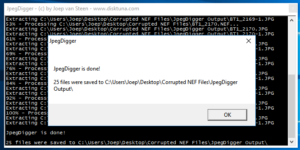 To be honest, the chance that you will recover all JPEGs using the above method are far from perfect. I have seen it work, but I have also seen it recover nothing useful. But it’s free and as long as you don’t try it on the memory card itself, there is little harm in trying it.

The best chance for recovering your photos is probably using photo recovery software. You can also try a conventional undelete tool but as Chkdsk modified the same directory entries the software needs to find the deleted files you will probably need software that scans the media for the files themselves.

This is also called RAW recovery or file carving. Whether you use undelete or photo recovery software, fragmented files can not be recovered unless you use specialize software like JPEG Recovery LAB.