HD Sentinel is a memory resident tool that monitors the health of hard disks and solid state drives using S.M.A.R.T.. All hard disks die. It’s a fact of life you better prepare for. In the first place by backing up your data. But even with your data backed up it is good to have an in advance warning when your hard disk about to fail.

I am not a fan of non essential utilities running in the back ground continuously. But I am willing to make a couple of exceptions: I run an virus scanner, a backup tool … and HD Sentinel.

A hard disk health monitor, monitors information that the hard disk reports about it’s own health condition. This information can be useful in predicting hard disk failure. S.M.A.R.T. is the source of the data that is used to analyse the performance and health of the hard disk (and SSD too).

Based on years of experience and data, HD Sentinel perfected it’s ability to predict hard disk failure. Unlike simpler S.M.A.R.T. utilities it is more than just being a messenger of the data published by the hard disk.

SSD, USB and RAID too

Where most of the hard disk monitors and S.M.A.R.T. utilities are unable to monitor disks that are ‘behind’ USB and RAID controllers, HD Sentinel does work with most of those. The list of supported hardware us impressive and grows on a regular basis. HD Sentinel is one of the best maintained utilities around.

A wealth of information

When first running the program you may feel a bit overwhelmed. It shows lots of information! And lots of TABs, buttons and menus are available. The good news is, that if you don’t feel like it, you do not have to dig deep the crucial information. If all is well, HD Sentinel will report the disk status as excellent. If you want, you can now close the program and it will simply monitor the disk in the background. The next time you start Windows, it will automatically start again.

For those wanting to do active hard disk maintenance, HD Sentinel is the tool of choice too. The software can do S.M.A.R.T. self tests and also various surface scans. Running tests on the disk allows the disk to detect errors that could otherwise go unnoticed until a specific weak area is written to.

Normally, in order for software to write to a hard disk on the block level, it must be able to lock the disk for exclusive access. However, this isn’t possible for the disk containing your system (normally c:) drive by definition. However, HD Sentinel is now able to repair bad sectors even on a disk that is unable to lock (Select ‘Surface test‘ > under ‘Test type‘ select ‘Disk repair‘). A cool and unique feature is, that HD Sentinel is able if and what file is affected by the bad sector. 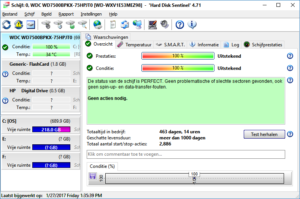