If there is an immediate need to recover data from a failing disk, the best advise I can give is to use a file recovery software. Good file recovery software like ReclaiMe or iRecover will allow you to create a disk image. Once you have a disk image, you’re safe and no longer have to worry about the disk completely failing. You can then recover data (individual files) from the disk image.

I did an article on Spinrite and it’s data recovery capacities or claims before. I explained why I do not consider Spinrite a data recovery tool. It does not mean Spinrite serves no purpose at all or that I consider it a flawed product! Spinrite can be very useful for hard disk diagnostics. Many keep Spinrite on a boot disk and fire it up whenever they want to test or verify the health of a hard disk.

Unfortunately it has been years since that last version of Spinrite saw the light, and it appears it has it’s fair share of problems running on modern hardware. It’s OS, it requires DOS, isn’t really fit for modern hardware either.

Second problem is, that using Spinrite gives you an insight in a disk’s condition at that point in time. If a serious problem is developing it is very easy to miss that if you’re relying on Spinrite.

Due to these problems it is impractical to use Spinrite, while in itself keeping an eye on a hard disk’s health is a very sensible thing to do. This is why I’ll introduce you to two possible alternatives, HD Sentinel and HDD Regenerator.

Why it is useful to monitor hard disk health

Before going to the Spinrite alternatives it’s good to answer the question if there’s any use in keeping an eye on your disk’s health.

Hard disks die. All of them. At some point. That’s why we make backups. So, in case a hard disk dies, get a new disk and restore the backup. So, what’s the problem? Why monitor a disk?

If you know in advance that a disk’s physical condition is deteriorating, it gives you time to plan ahead. Instead of waiting for the disk to fail at the worst possible moment, you can replace the disk at a time of your choosing.

Something I hear on a regular basis is that disk failures can’t be predicted anyway. Sometimes people mention Google and Backblaze findings that supposedly supports this view. The latter simply ain’t true which you will see if you look at the data more closely, nor do Google or Backblaze claim this. And yes, it is true that not all hard disk failures are predictable.

Hard disks report a great deal of data about their own condition, performance and health. I did an article on this here, if you want to read about SMART attributes and thresholds. In it’s simplest form, imminent hard disk failure is predicted if the value for a pref-fail attribute reaches threshold that’s determined by the disk manufacturer.

What the Google and Backblaze studies do show, is that this approach is too simplistic. Experience and studies show that: hard disks may fail even if no critical pre-fail attributes ‘triggered’ and that hard disk perform fine even though a pre-fail attributes are below threshold. It is by no means a binary thing.

HD Sentinel will warn you about exceeded threshold conditions like any SMART monitor would. However, apart from that it will do it’s own analysis of a disk’s health and performance. This analysis is based on real world experience and a data base of a large number of hard disks.

Spinrite’s main attraction is it’s disk surface scanner. During it’s scans it tries to estimate a disk’s condition and tries to detect surface defects. Surface scans are an absolute requirement for detecting such defects and both tools we’ll discuss offer a surface scan. For one of the tools, HDD Regenerator it appears to be the main feature and selling point. Also, it appears to be positioned in the market as a more up to date alternative for Spinrite.

According to the manufacturer Hard Disk Sentinel (HD Sentinel) is a multi-OS HDD and SDD monitoring and analysis software. A commonly observed user comment is that the interface looks ‘cluttered’. However, HD Sentinel simply has a lot to show you. 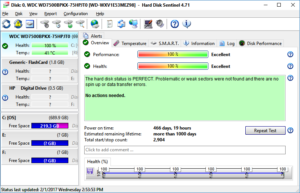 The thing is, you don’t have to look at it all. HD Sentinel is pretty much an install and forget tool. It’s primary goal is to give you in advance warning if the disk’s health or performance is deteriorating. And it can do it’s job quietly in the background, using very little resources. As long as the disk is okay, you won’t notice it’s there.

If the time comes that TSHTF it will warn you by showing a pop-up, playing a warning sound, by sending a message to another PC on the network, or by sending you an email. This is all configurable. It is even possible to initiate a ‘panic backup’.

A little getting used to

If you do want to explore all HD Sentinel has to share with you, all it takes is a little getting used to. It’s home page shows most info in a single glance. A health and a performance bar the most important information. Right below that is a summary of the overall status. If all’s well it will read: “The hard disk status is PERFECT. Problematic or weak sectors were not found and there are no spin up or data transfer errors. No actions needed.”

In my opinion, HD Sentinel is the most matured, feature rich and accurate hard disk health and S.M.A.R.T. monitor that money can buy. It supports more hardware and disk configurations than any other similar tool that I am aware of. It monitors anything from single hard disks, to external USB and disks ‘behind’ a RAID. Even if your hardware isn’t supported yet, chances are that it will be soon as it is the most actively maintained hard disk monitor suite.

HD Sentinel as replacement for Spinrite 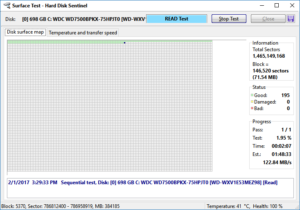 Pro has it all. In Windows

The Pro version offers more options like a disk surface refresh mode: Read data – write data – verify data. There is a variety of parameters that can be configured. For example the test pattern: sequential, random, backwards sequential or butterfly. HD Sentinel is perfectly able to detect weak sectors and to get the disk to reallocate bad sectors.

One of the cool things that using the latest (Pro) version of HD Sentinel offers, is the ability to repair bad sectors in Windows even if the disk can not be locked for exclusive access! So there is no need to reboot to DOS for this, you can do it conveniently from Windows.

If files are affected by the bad sectors, HD Sentinel will list those after finishing the scan.

HDD Regenerator is somewhat the opposite of HD Sentinel: it is primary a disk surface scan and repair utility. Instead of overwhelming you with information and options, the feedback the program offers is sparse as is the documentation.

Let’s start with the feature that watches the hard disk health in the background. Where HD Sentinel documents in detail with formulas and all, what it takes into account when calculating the disk health, HDD Regenerator does no such thing. But after using it for a while, It appears it is pretty simplistic. 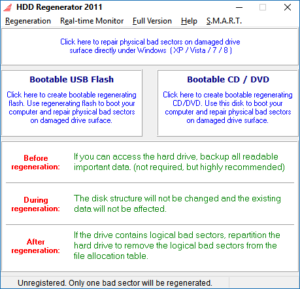 Default setting was that ‘not important drive pop-ups’ were enabled. As a result I got a warning every few minutes that some attribute had changed. Attribute values change all the time. For example, disk temperature fluctuates constantly. Every hour the disk is an hour older. I don’t need to be notified of that. Specially not by an alarming pop-up that warns me to back up my data immediately as the disk is failing.

HDD Regenerator can perform a surface scan directly in Windows. However it can not repair the disk containing the ‘live’ volume (the C: drive normally).

To perform a read/write scan on a in use disk you need to use the DOS version. Two options are available that help you build a bootable Flash drive or CD/DVD.

Similar to Spinrite’s marketing the HDD Regenerator marketing does make some extra-ordinary claims and comes up with pseudo scientific sounding technologies. For example: “Hysteresis loops generator”. Seems like a typical marketing thing that sounds cool and explains nothing.

It also claims to be able to recover data from sectors where other utilities can not. Maybe it does because it tries longer. Keep in mind that on a disk that’s rapidly deteriorating you do not want to try to hard on difficult to read parts. In the process you may kill the disk without having tried the easy to read data.

algorithms to repair a disk’s magnetic structure sounds like an unrealistic claim.

Yes, HDD Regenerator can probably replace Spinrite, unless the DOS portion runs into the same hardware compatibility issues as Spinrite.

The ability to scan a disk from Windows is a nice addition. However you will not be able to scan a disk that contains the running operating system. For that you’d need the bootable flash drive or DVD or you’d need to attach the ‘victim’ disk to another PC.

It’s very well possible to replace Spinrite with alternatives that do support modern hardware. For keeping an eye on your disk’s health certainly as Spinrite isn’t equipped for monitoring during every day use.

There are times where a bootable, stand-alone option is nice. For Spinrite it is the only option. HDD Regenerator also offers the option to create bootable media to boot a PC with. So, both are able to maintain and repair hard disks with Windows out of the way. Spinrite is certainly nicer to look at. At my test PC I had no trouble running HDD Regenerator, and it runs Spinrite fine as well. Spinrite however wasn’t able to access SMART info.

HD Sentinel offers both a DOS and a Linux version, as well as an option to create a bootable disk. However the DOS/Linux version only allow you to examine the disk health. Also, it is possible to set certain hard disk features. HD Sentinel had no trouble digging up all SMART info. However a surface scan is not possible.

In my opinion HD Sentinel is the clear winner here. When we limit ourselves to the hard disk health monitor portion of both HD Sentinel and HDD Regenerator then there is no comparison. While I type this blog article, numerous ‘alarms’ went off, issued by HDD Regenerator. Each alarm is accompanied by the urgent message to back up immediately. It is close to useless. 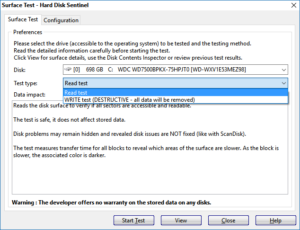 Both tools allow you to run surface scans to detect errors and fix (reallocate) bad sectors. However, you’ll need the pro version of HD Sentinel for the read/write test/scan. But then you have a highly configurable scanner which will show you good, weak and bad sectors.

HDD Regenerator can not write to a volume that can’t be locked, which at least includes your C: drive. That means repairs are not possible on this volume.

EDIT March 3, 2017: HD Sentinel now actually *IS* able to do bad sector repair on a volume or disk that can’t be locked for exclusive access (I am using version 4.71.11 – Pro version). So, that’s more points in favor of HD Sentinel definitely!